Hit enter to search or ESC to close
Culture/Community

Christina Landrigan and the Theory of Dependable Goodness 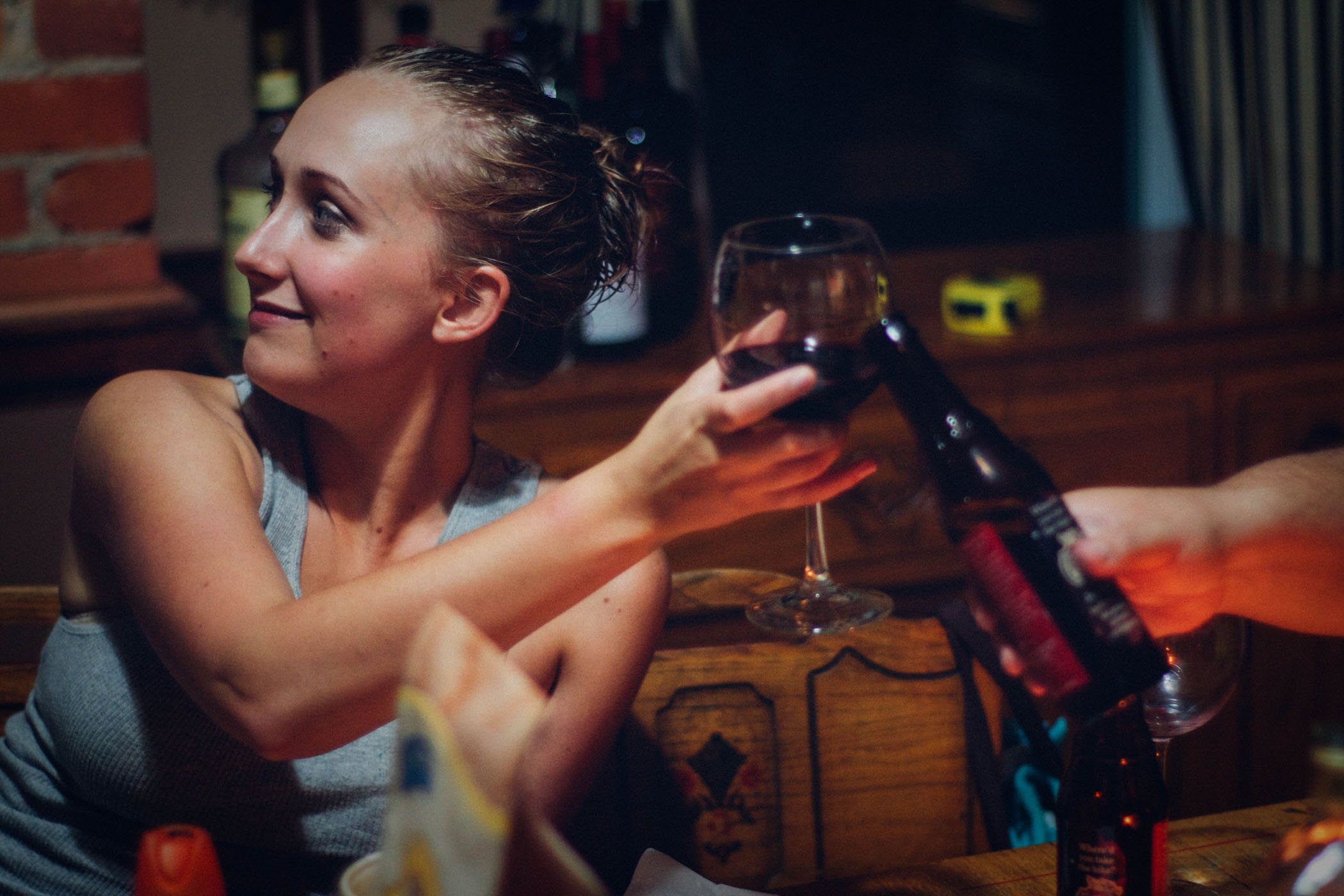 I was six hours removed from the Eastern timezone and nearing the end of a happy trip to visit my sister in Germany on January 6th.

Unable to sleep in anticipation of the flight and feeling refreshed to tackle work back home, I scrolled through Facebook and saw an article about a serious wreck involving a semi-truck that had occurred not far from home in Fort Wayne. I’ve always paused at news items like this because it meant somewhere in some way, a life had been irrevocably changed.

It wasn’t until I touched down in Detroit the next afternoon that the article’s relevance became personal. After turning my phone back on stateside, the messages from several people arrived in a jumble, delayed by flight times and technology.

As it turns out, the day before had been the last day of my friend’s life.

I’d last spoken to my friend Christy Landrigan on the eve of my ten-day adventure – one that she knew had been a long time coming. She knew that the purpose of the trip and my company for they were extra special. To quote from her messages to me: “ZOMG GERMANY TOMORROW!! Are you packed? Are you ready? Tell me things!”

Christy and I often caught up in these quick exchanges – a sudden burst of text messages traded like old friends passing on the street. Months would pass by before we’d talk or see each other, but catching up was always effortless and earnest.

I last saw Christy on December 12th at the Santa Train – an occasion where she, as the doting aunt she was, had scooped up her brother’s children and proudly boarded them on a train to the North Pole. She had an inside connection on the Santa Train because I was the conductor. It was well known among friends that I had the hook up for kids who liked trains and still believed.

I received this message moments after they left:

“Thank you so much for the VIP treatment. The kids didn’t express it around you much but had a great time and we’re really excited that we got to do it again this year. It’s one of my favorite traditions. And they love their new train swag.”

She went on a moment later: “We spent the drive over talking about the earth, satellites, the atmosphere, comets, the Hubble telescope, and aliens. Then we got to talk about the train and how it works too! So cool to watch their brains absorb that information.”

It was now Wednesday, January 7th. And Christy had vanished in an act of mechanical violence on a little road in a little town the morning before.

A life had changed, after all.

There are a few things you should know about my friend.

She had a social charisma that would be the envy of butterflies. She was always an inch taller than me in her colorful heels. She was hard to catch except between migrations between her numerous groups of friends and she yearned for more time to be involved in a community she loved. She loved her family and nieces and nephews.

She was the bold firecracker in an otherwise traditional Catholic family. Her boyfriend was an old writing partner who had been sweet on her for years. Her friends were an electric mix of artists, entrepreneurs, thinkers, and doers. The last conversation she had was with her newly engaged sister about bridesmaid dresses. She had just gotten a new position at Lincoln Financial as a retirement consultant, giving her just enough breathing room to feel like she could revisit her many passions with renewed energy. It was on an errand for this new position when she was killed.

She could be wry and sardonic, but there wasn’t a sharp edge about her. As much as it may redden her family’s own cheeks to know it, she could use her language in a way that’d make a battleship blush. She was often hard to pin down, with weeks between messages that read “we need to catch up soon!” or “you’ve been pitter-pattering around my brain.” Five years ago I called her the “Lady Gaga of entrepreneurship” and upon remembering this she exclaimed: “I still feel like that young pup.”

She was forever excited about the sweet old Bungalow at the corner of Indiana Avenue which had become her home a few months before. It was on the porch of this house sometime last summer where she brought me Bravas burgers and whiskey as I struggled to absorb the blow of a tough breakup.

As time went on, I would text her occasional updates on my life and relationship and progress with downtown projects and be met with ravenous approval. She would share a few gratifying and challenging moments with me, too.

Our love for the community is what made us friends. For a time six years ago we’d gather with pals and my cousin Sam at a house in Southwood Park on Monday nights and drink and smoke cigars. While we didn’t feel like we owned the world, we laid claim to a rather nice corner of it. Christy and I were never romantically involved, but our respective passions and interests made for easy friend crushes. It was a friendship of mutual advocacy.

In the days after her passing, her Facebook page lit up with remembrances and comments from hundreds of people. I once figured that Christy and I had a very special rapport, but what amazed me from the outpouring of memories was that while our friendship was special, she had a unique connection with so many others, too. She was many things to many people, most of whom she purposefully kept compartmentalized and separated so she could tend to them individually as if those relationships were different plants in a garden. I knew things her best friends didn’t know and vice versa. A few of us, even in different circles, had similar but different glimpses into what made our friend tick. She shared herself knowing each person in her life contributed a different flavor and feeling and she was the excited chef sampling as much of life as she could. She thrilled at connecting the dots and moving people into people and I owe a few friendships to her extra boost.

When she died, she left countless people just one conversation away from solidifying plans to catch up or grab a drink or talk about community development.

It wasn’t until her funeral, where the wait to greet her family stretched over three hours, that I had realized just how much I meant to Christy.

“She loved you so much,” her parents said, holding me close.

I had met them maybe only once or twice in 2011 and was stricken hard by their recognition. Strangely, for that extra-long embrace with her parents, they were consoling me. I lost it.

I guess I’d always known we were good pals, but I hadn’t known that even in Christy’s busy, varied life that I’d ever warranted such a mention. It’s a rare moment of perspective when you learn how much you meant to someone from the people that loved them, too.

We had once been a little closer – seeing each other regularly and talking just the same. And even though I saw her a handful of times in 2015, the friendship and appreciation remained. Somewhere in between, a phrase had emerged between us to describe a central quality of indelible friendships: Dependable goodness.

My dad vanished slowly over 13 years following a stroke until he finally passed away in 2014. It was his stroke first, and then later his death and my own tough summer that followed which impressed upon me the desire to better express love and affection for the people I appreciated.

I started calling my cousin Sam my “brother cousin” and my friends “brothers.” Christy and I were no stranger to saying we loved and cared for the other – not as a romantic gesture, but as one of sincere appreciation that the other existed. It’s one I exercise often with my closest friends – my river friends, my train friends, my circle of pals, my old filmmaking buddies — there’s not a good friend on the railroad that I haven’t hugged and told them I appreciated them and loved them. Imagine dudes in overalls hugging after playing train all weekend. It happens.

In the days after Christy’s death, I told my girlfriend that “sometimes I may love on you a little harder” because as silly as it sounds, the opportunity may not be there one day. You don’t always get a choice as to when and how good people go away – but you do get to chose how to love them while they’re here.

Christy’s legacies are many: the impact she had on the community, her family, her workplace, her friends. Others certainly have more memories and moments than I ever could. It doesn’t make a lot of sense to lose someone like her. But I suppose death isn’t known for its sensibility.

After following a line of 53 cars to Christy’s gravesite off Lake Avenue where she was to be buried, Sam and I had a late afternoon lunch and remarked how at 30 years old, we were slowly approaching the point in life when the number of people who meant something would start to dwindle.

Christy’s passing has made me wonder: Where else is dependable goodness? How dependable are we to the people we love? Are we dependably busy? Dependably frustrated? Dependably positive?

What can our friends and loved ones always count on us for? What can we do to be that safe room for the people we love?

What can we do to be dependably good to ourselves? I’ve struggled perhaps with the last one the most. Even when Christy was critical of my choices or uncertain of her own, she chose kindness, acceptance, and compassion above all else. If she was selfish, it was only to surround herself with the things she cherished as much as possible.

At her funeral service, her father remarked that the outpouring of love for their daughter had given the family courage to endure her death. Sitting by myself in church for the first time in a while, I felt that courageousness was indeed a rare gift. It was a gut-wrenching consolation.

Dependable goodness takes conviction and consistency and selflessness. It’s the desire to put joy and comfort in the eyes of the people closest to you. It is a rare trait. Sometimes I think the heaviness of adulthood only permits goodness in fair weather. It is an effort, to be sure.   Do your friends know you love them? Do your loved ones and partners feel how fortunate and lucky you are to have them? Do your coworkers know you appreciate them? Do your kids need that one extra reminder before they start their day?

If these words have given you pause for even the briefest moment, pick up the phone and send obnoxious, loving texts to your people. Call them. Send them a picture. Make them laugh. Love on them a little harder, please. Love them and share the reasons why they make your eyes wet. One day you won’t be able to tell them, so tell them now.

Dependable goodness asks for dependable company. And I hope as I get older, and as the number people in my life who mean something get smaller, I hope I can be more like my friend, who was always dependably, wonderfully good.